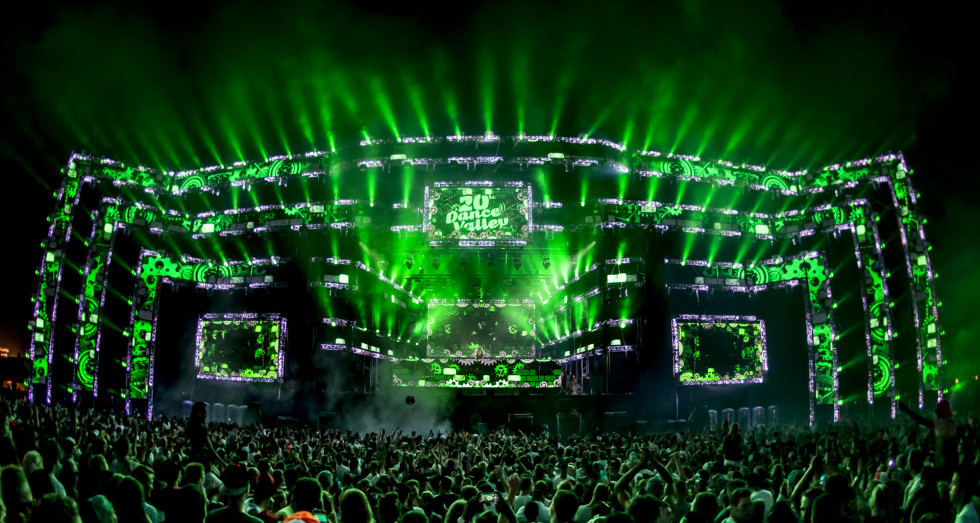 NO GUTS; NO GLORY!

REVIVAL OF THE FITTEST, GUTS IS THE KEY

The festival season rush is over and the New Year is only a few weeks old: a perfect time to reflect on the year(s) that has passed.

With a growth of at least 20% a year and a yearly turnover of about 100mln euros, the festival industry is a serious one, with growing competition. Some newbies kick the bucket; others earn a permanent place on our yearly calendars. But after decades of success, even the golden oldies still have to reinvent themselves. But how do they do this?

Dance Valley started off in Spaarnwoude in the summer of 1995 with about 8000 visitors. Carl Cox kicked off the show and was there to stay. It was the beginning of  many peaks; 1999, Jeff Mills and the helicopter that brought a shower of flowers from the sky; the millenium with Armin van Buuren;  Junkie XL’s ‘Conversation’ went global; Basement Jaxx, The Prodigy, they were all part of it.  Dance Valley exploded: booking up to 150 dj’s, visitor numbers increased up to 90.000, and they even expanded – temporarily – into a weekender. However, in 2010 and 2011 the ticket sales relapsed and in 2012 Dance Valley realized it was time for a change; the mother of all festivals needed to reinvent herself to keep up with the demands of the mature Dutch market.

Halfway 2012 Dance Valley hired Treat-Amsterdam to bring about a radical restructuring of the festival. The first year was mainly spent analyzing the entire set-up of the festival, which resulted in an elaborate 3-year strategy. Under Treat’s wing, Dance Valley went back to her roots. The colorful fantasy concepts where abandoned and instead the DNA of the organization was incorporated in a new and more authentic style.

In only 3 years Treat analyzed and re-styled the entire look & feel; the identity; the target group, the route-to-market and communication of Dance Valley. All of which was showcased in the celebration of the 20th anniversary of Dance Valley 2014; with a totally renewed and fitting style. Treat chose to embrace ‘the street’ as the natural environment for Dance Valley. The look became less frivolous and more raw and robust, and thus more authentic; but above all, it was a better fit with the true identity of the organization.

Self-awareness and knowing what you stand for is an essential part off creating the right perception and mood in the process of building up to, and during, the festival. “The street was the ideal starting point for the Dance Valley experience”, says Sophie Louise, creative director of Treat Amsterdam, “we believe an experience has to be implemented in every detail of the story you tell. So, all expressions of Dance Valley had to be linked to the street. We don’t want to just tell some random story, because the audience doesn’t buy that: we need to tell a genuine story. If you claim to be ‘from the streets’, you have to be from and on the streets. So we actually brought the festival to the streets by kicking off with a huge ‘street art’ campaign.”

Based on the repositioning of the brand, the new style was translated into all aspects of the event. On the festival grounds itself the number of stages where reduced and the new identity was also brought to life during the festival, for instance by adjusting the line-up to fit the concept. The new ways of communicating with the public also contributed greatly to the success of the event. For this major project to succeed, Treat formed a ‘dream team’ of professionals to combine the individual skills that led to the achieved successes.

“Stick out of the crowd”, says Marcel Pantera from Treat, “dare to really look at your audience, to take them by the hand, and above all to be a leader in your field by doing that. Reinventing yourself is always driven by vision, but following your vision wholeheartedly takes courage!”

For the online strategy and implementation, Treat worked with Denis Doeland of DDMCA. Not only is he an online specialist, he also uses his years of experience within the industry to teach many ‘analogue’ companies how to think ‘digital’. His effort boosted the online strategy immensely.

By using a professional social-war room behind the scenes and a team of social media freaks in the field, a permanent flow of content flooded the Dance Valley channels during the festival day and this approach turned out be extremely successful.

Under the direction of Denis Doeland as CDO, UDC also caught up digitally building up to the event: “Entrepreneurs, managers and professionals are too little preoccupied with how the internet and social media can work for them. They are still focusing on the old-fashioned push-principle based on checklists, to literally send messages. That mentality is in our blood, but the internet environment has changed completely, and so did the rules! Customers and fans prefer to listen to each other rather than letting advertisements tell them what to think. They are more empowered and have more power than ever before. On the way to a likeable organization, it is an absolute must to (re)find the connection with the public on an emotional level. Dialogue is the keyword for this. With the new online strategy and campaign of Dance Valley, UDC takes the lead in the scene, showing everybody that big successes are possible by well thought and integrated strategies.”

Besides great online efforts focusing on commitment and presence, advertising, (social)reporting, PR, and dialogue, offline communication and exposure is still a very powerful tool within the Dutch festival scene. The outdoor campaign of Dance Valley had a lot of exposure on the streets. Besides the traditional posters, a life-size streetart campaign was rolled out. Treat developed this in cooperation with Reality Outdoor and Xvertising. Reality Outdoor found new ways to creatively translate the concept to the streets: chalk graffiti, illegal posting and pop-up activations provided a real and relevant connection with the public.

Embracing lifestyle PR agency Vandennorth for a positive 360 approach resulted in a broad spectrum of publications on many different levels; from daily newspapers to showbiz television programs. And those publications were not merely dance related, but also very much linked to lifestyle, for instance in fashion reports and interviews with renowned DJ’s. During the event, the press center worked closely with national and scene-related media. The accomplished free publicity concerning Dance Valley 2014 increased with a 34% compared to 2013.

Treat-Amsterdam has had a spectacular 20th anniversary of Dance Valley and looks back at where the rebranding was successfully implemented with a clear view and guts towards to future to claim our own relevant spot in this crowded market. Treat is an Amsterdam based creative agency that specializes in concept and show for the entertainment field. We proved with the reinvention of Dance Valley to be genuine storytellers creating an integrated all-round strategy.

Click here for an impression of the artwork, photo’s and video’s 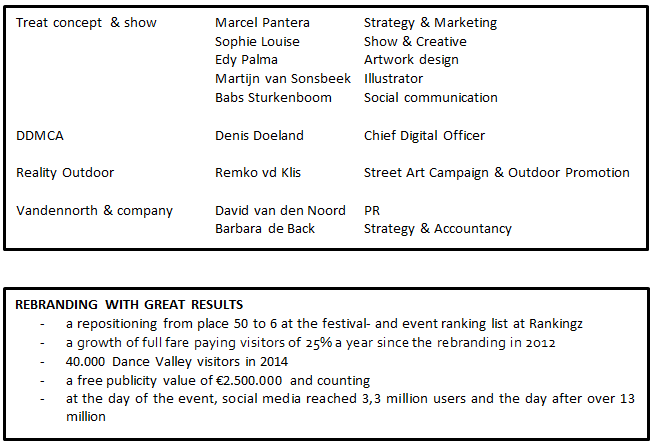